Crotch shots of the candidates

(The picture above is discussed at the end of the post.)

A Washington Post fashion article dithered breathlessly about the greater meaning of Hillary Rodham Clinton's modest amount of cleavage on C-SPAN 2. The article is ridiculous from start to finish, and leaves the impression that gazing upon such a salacious expanse of flesh is enough to give one the vapors. 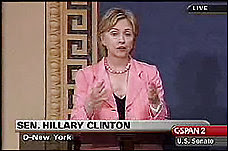 The writer, Robin Givhan, bloviated, "Showing cleavage is a request to be engaged in a particular way. It doesn't necessarily mean that a woman is asking to be objectified, but it does suggest a certain confidence and physical ease.

"It means that a woman is content being perceived as a sexual person in addition to being seen as someone who is intelligent, authoritative, witty and whatever else might define her personality. It also means that she feels that all those other characteristics are so apparent and undeniable, that they will not be overshadowed," Givhan continues.

This did not go unnoticed at NOW headquarters. Weeks ago, they started a petition to the media asking them to abstain from writing about Clinton in ways they'd never write about a male candidate. (You can sign the petition at that link.) So they take articles like this seriously, but are not Humorless Feminists™—they also recognized the hilarious absurdity of the piece. In today's "NOW Actions" e-mail, they're calling for your reactions to the story, 'whether analysis or satire." Send your responses to cleavage@now.org.

Here's what I think:

Every time a male candidate is seen without a jacket, let us call on the media to take pictures from the rear. The electorate cannot make an informed decision without scrutinizing the asses of all the candidates and parsing the inner meaning of the fit of their pants. Does it look like he's lost a little weight? Or gained? Has he been working out? Are his buttocks probably flabby? What sort of gluteal confidence does he present?

Let's not forget where the focus really belongs, however: The media must scrutinize the candidates' frontal presentations, too. Is there a hint of firm pectoral muscles, or of man-boobs, or of age-related sagging? And how about his crotch--is there a hint of penis? How big? Which side is it resting on? Do his balls hang low, do they wobble to and fro?

Really, the only male politician we've had these discussions about is Dick Cheney (see intriguing photo here). And he's not running for office. We need close-ups, people! Close-ups of the crotches of every man running for president!
Posted by Orange at 10:21 PM

Labels: crotch shots of the candidates

Hey, Orange. I have an unrelated comment/question. I am a soon-to-be-graduating English major, and I was wondering if you could offer me some advice on how to jump into the world of editing. Should I start gaining some real-world experience before I continue on with a graduate program? How should I go about starting a career in editing? I don’t feel as if I have any connections, so I am lost on how to get started. Can you offer me some advice?

Yeah! Open those tips wide on the sky!

Need advice, I did the old-school thing of majoring in English and applying for entry-level editorial assistant type jobs (advertised in the paper) after college. I had a smidgen of college newspaper experience and a resume and cover letter that reflected attention to detail and the ability to write. Everything else built out from my start as an editorial assistant, doing clerical work for crappy pay at a publishing company and eventually moving into an editing/writing position.

I never went to grad school because there wasn't anything I wanted to immerse myself in enough to write papers on (I procrastinate horribly, or perhaps it's that I procrastinate exceptionally well!), and because I was doing the work I wanted to be doing and didn't need additional educational qualifications.

The University of Chicago's continuing ed division offers editing classes in Chicago. There are 4- and 8-week classes as well as 3-day intensives; each costs about $900. The Denver Publishing Institute is also highly regarded.

Great. I was just about to eat lunch. Dick's dick changed all that.

Ditto what Orange said -- low-paying entry level job is the way to go. Then pick the brain of every editor you meet/work for.

As for the men -- I think we need weekly rankings of how many times they reach for their crotch to scratch, adjust or reassure. I think you can tell a lot about a man by his relationship to his crotch. My ex was always fiddling with his, adjusting the vents in the car to give him maximum airflow, tweaking, etc. Drove me nuts. Har, har, excuse the play on words.