...because they let me provide bloggy little updates in a fraction of the time.

But I owe you more than that.

Have you seen the commercials for the new Dora the Explorer Suds and Styling head? Because that is what was missing from the character with a feminist/humanist basis—that a girl can be an independent explorer and problem solver. Hair-styling! Dora has short hair, so let's make a big head with long, silky hair that little girls can brush. The toymaker's one sop to feminism is that the toy has "face paint" rather than makeup—but what do you want to bet a bunch of little girls will go right ahead and paint makeup onto little Dora's face? Yes, Dora's time as a bold explorer is drawing to a close. It's time for her to focus on looking pretty for the boys. Can stiletto-heeled mini-skirted full-breasted Dora the Sexplorer be far behind?

And I'm all about freedom of choice, sure, but that woman with the octuplets: What the fuck? Let me count the problems here. Her infertility doc apparently transferred eight embryos into this patient. Eight! That is too many, especially in a 33-year-old woman with zero interest in selective reduction. "Surely the doctor just wanted to be kind," you argue. "This was her last best chance at becoming a mother, the poor dear." Yeah, except she already had six children age 7 and under. (I learned this from an LA Times article this morning, but I'm too lazy to dig up the link for you.) The 2-year-olds are twins, so it's possible that she did in vitro to conceive them and thus had a documented success rate with not only becoming pregnant (with or without in vitro), but having live births. And a lot of 'em! My cousin, a former NICU nurse, and I, a former NICU mom, guesstimated the total hospital bill for the mom's 7-week hospital bed rest and her C-section plus the eight babies' NICU stays. We're thinking $800,000 to $1 million. Did your health insurance premiums go up in January? Cases like this don't help. I'm betting her co-pay is way less than $750,000, so everyone else shares the cost. Which, you know, is fine if it's a bone marrow transplant or cancer treatment or something. But it just strikes me as selfish and a huge hogging of resources to have octuplets for your 7th through 14th children.

(Edited to add a link to Twisty's post on the octuplet situation at I Blame the Patriarchy. Be sure to read the comments thread there, too.)

Plus, it's still winter, and this January is the coldest January in Chicago in 24 years. And then there's the snow. We've had 2+ feet of it, and none of it has melted away. It's not as deep, though, because it's been condensing itself into a hard, unmeltable crust. I had a Facebook scrap with some Bostonians complaining about how woeful their slush was. Yes, we can all agree that slush is messy and icky and sloppy, and nobody likes it. But these Bostonians were acting like Chicago's January would be better than a day or two of slush. N to the O! I have not seen the ground beneath the snow for a solid month. The temperature may have snuck above the freezing point once or twice for a few hours, but the rest of the last month has been subfreezing. Cold, man. Sure, there haven't been all that many days with the subzero wind-chills, but day after day after day of 15, 20, 25—it gets old. The worst part of all this? February has yet to come. February is often even more discouraging than January because it just keeps being winter.

I do feel like I'm in a good mood today, but these things have been pissing me off. Now I can go have a good afternoon.

My job for you: Please vent some petty outrage in the comments. Something that's been pissing you off—let's hear it. Maybe you'll feel exorcised if you yell it loud enough.
Posted by Orange at 10:27 PM 8 comments: 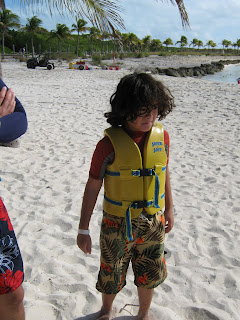 He hasn't gotten a haircut since last spring.
Posted by Orange at 10:25 PM 5 comments:

What's everyone doing about allowance?

All righty, here's the deal: Ben's 8, and he's a quasi-spoiled only child who's not expected to do much around the house. He has no specific scheduled chores, though we sort of put him on empty-the-trashcans duty. We haven't started giving him a weekly allowance, but I'm wondering if it's time.

So: What are you doing, if you've got a kid of allowance age in the house?
Thanks for your input, folks.
Posted by Orange at 3:07 AM 5 comments:

You know the best thing about living in an apartment or condo? If you're not on the top floor, you can use the phrase the man upstairs to talk about a real person.

I shoveled the sidewalks 12 hours ago and they were clear. Now it's snowing again, with an inch or more blanketing the sidewalks and a few more due by morning. But no worries! The man upstairs will take care of things. He's going to shovel in the morning.

In my building, there are two men upstairs. The other man upstairs didn't volunteer to do most of the shoveling this winter, but he is really sweet nonetheless. The man upstairs lives with Isabella—a dog in one case, a daughter in the other.

Next time I see him, I'll have to give thanks to the man upstairs for clearing the snow.
Posted by Orange at 10:47 AM No comments:

You know the Snellen test, don't you? You may think you don't but you do: It's that eye-exam chart with the big letters on top and the teeny ones that I can't discern on the bottom.

From now on, I'm boycotting any eye doctor who doesn't switch to the texter's eye chart:

I love it, and I don't care if it hasn't been scientifically validated as a vision screening tool.
Posted by Orange at 12:56 AM 1 comment:

Guess where this happened?

It's Saturday night, and you know what that means—quiz time!

Identify the location of this true-life scenario:

There is a man.

He is in a silver Hummer.

And not just the little H3. It's the bigger H2.

The driver's window is open.

The music is blasting ridiculously loud, reverberating within the concrete walls of the subterranean parking garage.

He is smoking, and the stink fills the enclosed space.

And the parking space he's in? It's the reserved handicapped spot closest to the elevators. The Hummer, of course, bears no placard or tags authorizing the vehicle to take that space.

So, what store is above this garage? Leave your guesses in the comments.
Posted by Orange at 7:43 AM 9 comments:

Mr. Tangerine recently observed that if you're starting a food business and you want crunchy affluent folks—the sort who shop at Whole Foods—to flock to your product, you want to have a brand name that's a first name. To wit:

Stacy's All Natural Pita Chips. I love the cinnamon sugar ones.

There's even an Yves...If You Please! brand of vegan hot dogs. Oscar Mayer has a second name, but the brand with veggie healthnut cred? First name only, of course.

I must be forgetting a bunch of first-named brands that epitomize the worst in American processed foods, but all the biggies that come to mind now have last names—Kraft, Kelloggs, Totino, Betty Crocker.

Can you think of any crappy brands of junky food with a first-name-only brand?
Posted by Orange at 9:34 AM 6 comments: