You know the Internet slang teh, used jocularly in place of the and as a sort of intensifier?

I coined that. I have proof, right here on a drawing I made circa 1971, years before the World Wide Web existed. 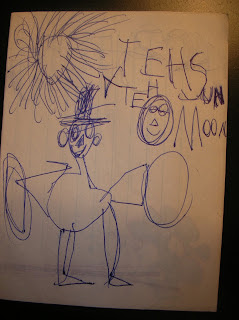 Too good not to blog it

I should be really finishing those Christmas cards (just a few more to go...) and driving them to the post office, wrapping gifts (...haven't started yet), shopping for a few last presents (without a list), putting away the laundry, straightening the house, or making myself some lunch right now. Instead, I must blog.

Mr. Tangerine is working from home today as he is coming down with a sniffly cold, his work is perfectly laptoppable, and it's his last work day before taking next week off. So after three or four hours of working from the couch, he begins to seek his BlackBerry. Where could it be? He thought he'd placed it in the pocked of his pajama pants. (What woman has ever had pockets in her pajama pants? Ripoff! We need pockets, too.) It's not there. It's not under his butt. It doesn't seem to be in the couch's crevices.

It took me a good 15 years to learn not to spring into action when Mr. Tangerine can't find his stuff. I didn't lose it, so why should I look for it? Much more relaxing not to involve myself. Should've quit years ago!

So I suggest that he call the phone and listen for its ring. That doesn't work. Why not? Where could it be?

Eventually, Mr. Tangerine stands up and looks around for his PDA. Oddly enough, the BlackBerry was resting on the living room bookshelf, alongside my collection of glass paperweights. Now, that's one shelf over from the CDs, but I was the one who grabbed the Nirvana CD this morning, not him. He doesn't know why or when he shelved the BlackBerry.

"Why didn't it ring?" he queried. He looks it over and discovers it has been set to "quiet." Now why would he have set it to quiet mode? He doesn't know that any more than he knows why he put it on a shelf where we don't just stash random things.

It is possible he is losing his mind, isn't it? What a shame it is to lose one's mind, or not to have a mind at all. How true that is.
Posted by Orange at 9:13 PM 4 comments:

The first place I saw this thingamabob—

was at philosophy professor Rob's blog, and he clocked in at genius reading level. How many levels are there between high school and genius? I don't know. I need to jack my vocabulary up, way up, to find out. At least I'm not at the junior high or elementary school level. That would make me sad. Not that there's anything wrong with blogs that are, apparently, easier to read—I enjoy 'em, after all.

Somebody—maybe Strunk and White, maybe a high-school English teacher—advised me to use a simpler, shorter word whenever possible. Why say gargantuan when big will do? Well, because sometimes gargantuan is what we mean, and big can't always embrace the level of meaning that's intended.

Erin McKean of Dictionary Evangelist wrote about the worth of using le mot juste when it's the sort of unusual word that your reader will be delighted to make the acquaintance of. Erin linked to writer James Meek's article in the Guardian, "From albedo to zugunruhe." Meek made a point of jotting down unfamiliar words he encountered in his reading and learning their meanings. Now, you may well need to look up five or ten (or thirty-five) of the words Meek mentions, but your vocabulary will be richer for it.

I'm always enchanted to find a word I don't know (unless, say, it's during the crossword tournament and said word is killing me), especially if it's in a friend's blog or e-mail. "Wow!" I muse. "She knows how to wield this word and I don't. She must be frightfully bright and well-read." I love learning that about someone, and I appreciate the opportunity to add to my vocabulary.

It's also fun to impress someone with an aptly chosen word, isn't it?
Posted by Orange at 2:08 AM 8 comments:

Who doesn't enjoy parodies of famous poems? I have no particular fondness for poetry, truth be told, but I'm a sucker for parodies thereof.

Today, Becky riffs on Poe's "The Raven" in her Ode to a Menstrual Cramp, complete with a shout-out to old belted Kotex.

If that whets your appetite for more spoofing of canonical literature, check out Francis Heaney's Holy Tango of Literature ("Holy Tango" is an anagram of "anthology"). It makes a fun $10 gift for those friends or relatives who were English majors or enjoy wordplay. In his book, Francis parodies numerous poems and plays by anagramming the author's name and riffing on that anagram as the subject of his poem. T. S. Eliot becomes "Toilets," for example, and the meter mimics that of "The Love Song of J. Alfred Prufrock." (I think. Am too lazy to double-check at the moment.) Gwendolyn Brooks becomes "We Long, Bony Dorks," a poem about math dorks.

You can read the entire book for free at Francis's website, but you miss out on the cartoon illustrations. And if you printed the whole thing out and gave it as a gift, you'd rightly be called a cheapskate by the recipient.
Posted by Orange at 10:08 PM 2 comments:

Narya linked to Sara's latest Cavalcade of Bad Nativities. Apparently she puts these up during the advent to Christmas, i.e., starting at the beginning of December. The month is young, so you'll have to check back throughout the month for more.

In the meantime, you can amuse yourself by beholding the many laughable, mockable nativity scenes available in 2004. Be sure to click through to pages 2 and 3 after enjoying page 1, and don't miss Sara's snarky titles and text.

I have no idea who Sara is, but I see that she also sells "wtfwjd?" t-shirts and merchandise.
Posted by Orange at 6:31 AM 7 comments: