When I was a teenager, my dad loathed squirrels. He bought a lot of bird seed to fill his squirrel-proof bird feeders, and those pesky squirrels managed to outfox human engineering every time. The first time I truly understood the Fear and Loathing of Squirrels was three years ago, at Flea's son's birthday party.

Then last year, a squirrel chewed through the screen of my kitchen door and had a freakout when Ben discovered him. (I now know what squirrel poop looks like.) I had a freakout myself, of course. This summer, another squirrel came through the kitchen door. Squirrels have gnawed through the hard plastic below the windshield of my car. A week ago, after a window had inadvertently been left open a few inches, Ben and I went out to the car and found a squirrel wandering about the vehicle's interior.

We know squirrels have a taste for acorns, nuts, bird seed, and bread products. They also like to get their vitamin A, it seems, as they like to nosh on jack-o-lanterns.

Exhibit A: Jack-o-lantern on Halloween. It has been outside for less than six hours. One eye socket and one tooth have been nibbled, and the "lid" is missing. 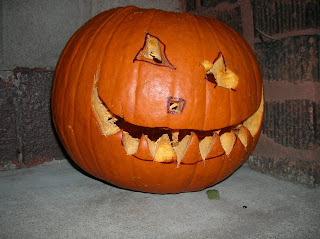 Exhibit B: Jack-o-lantern on November 2, after 48 hours of squirrel exposure. It looks like the jack-o-lantern is a heavy meth user. Every tooth is gone, and the lips, such as they were, have been chewed off. A squirrel neurosurgeon appears to have performed a frontal lobotomy. 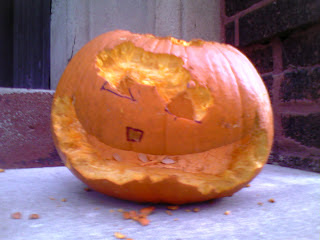 That is both sad and funny. I had no ideas squirrels were that invasive! I mean, the occasional chimney, yeah, but your CAR? And who knew they liked pumpkin?

Ech! That gives me the creeps. We live near a lake, and when we bring any sort of food to a picnic table there, the squirrels come right up to our feet and freak out my son (and I have to eat while stomping my feet frequently). Of course, when I showed your photos to my son just now, he just shrugged and said, "Pumpkins taste good." ;^)

BUT! That is the best jack-o-lantern I have seen this year.

The squirrels around my apartment aren't nearly as industrious. I left our pumpkin outside and nothing whatsoever happened to it. Which was good, I suppose, because the kids were *very* concerned about someone coming along and smashing it. But I see that I am digressing. ;)

OMG! Stop making me laugh during my conference calls! Bwaha!

Did I tell you about the Fat Squirrel that chased us when the Boy was little? Or the time I visited my friend in DC and a whole parked was roped off because of Attack Squirrels?

my philosophy professor was eating lunch on the grass and a squirrel hopped up looking cute.

BWAHAAA!
This has been the most joyful thread EVER!

Squirrels have attacked our pumpkins like that in the past -- always freaks the kids out.

And this year, they have chewed a hole into the attic, and are attempting to consume the rest of the house. They are trying to eat the kitchen and the porch, from the roof down....