I have been remarkably uninspired of late. But you know, a zillion other bloggers have been posting adorable pictures of their kids dressed up for Halloween, so I'd better jump on this bandwagon before it has left the barn. So to speak.

In our part of the city, some large condo buildings have trick-or-treating for the residents, and pretty much all the other buildings are candy-free zones. Oh, there may be some hapless and kind-hearted souls with huge bowls of candy, but they often languish all evening long when no kids show up. I mean, if you're a kid, are you going to go to an apartment or condo building, buzz the intercom to be let into the building, and then knock on a bunch of doors where no one's expecting costumed kids? No.

So it's wonderful that the neighborhood association (which I haven't joined because it appears to be largely a white yuppie group...plus I'm not much of a joiner) has organized a dedicated trick-or-treating zone for the past few years. We walk a half mile away to reach a half-mile stretch of a residential street where maybe 40% of the buildings are taking part. So that's a one-mile candy route if you do both sides of the street.

The last couple years, Mr. Tangerine and I were Ben's trick-or-treating escorts. This year, I told some of the other moms at the school playground about the candy zone, and we made plans to meet up. Mr. Tangerine was willing to come along, but Ben informed him that he must not. Just as well, because oh! Did those boys ever have themselves a grand time. Five boys racing pell-mell down the sidewalk—they were in such a hurry to find chocolate sources that they ran right past a couple gates. "Whoa, whoa, whoa! Back here, boys!" By the end of it, the kids were so worn out they started roughhousing a bit too much. Sugar high + bedtime + two-mile walk/run = wildness.

I'm not going to show you how Ben's costume looked. Store-bought Darth Vader costume, no big deal. And with the mask on, you can't tell it's him. And his friends' costumes were hidden by their coats (savvy Ms. Orange had Ben wear so many layers inside his costume, he didn't need a coat). But this photo encapsulates the sheer joy of trick-or-treating, doesn't it? 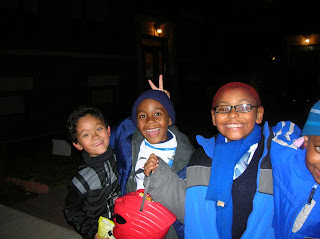 Those smiles, the intoxicating aroma of a bag full of candy, the promise of satisfying your sweet tooth with five lbs. of candy—I haven't dressed up in a costume in at least a decade, but damn, I think I love Halloween.
Posted by Orange at 4:29 AM

Aww. That's much cuter than costumes.

The sheer joy; thanks for sharing.