A child's grasp of King Day

Ben’s off school today in honor of Martin Luther King, Jr., Day. Last week, he learned about Dr. King’s legacy. He said they watched two filmstrips: Can this be possible? Are schoolchildren in 2006 still watching filmstrips? (I was always a smidgen envious of the go-getters who got to operate the filmstrip machine back when I was in grade school...)

Ben was telling me about King, but there are so many words in his full name, it’s hard for a five-year-old to get it right. I heard things like “Martin Luther Doctor King Junior” and “Martin Luther King Junior Martin,” and King Kong was mentioned more than once.

Ben was grooving on his garbled singsong rendition of “We Shall Overcome.”You know, I swear I never learned the song in school. “I’d Like to Teach the World to Sing,” yes. “We Shall Overcome,” no. A tremendous shortcoming in my education, surely.

He learned about segregated bathrooms and bus seating. He learned that the civil rights movement tried to make things more fair for black people, but he didn’t really know what “black people” meant. (These people are brown, darn it! Ben, like most innocent kids, characterizes people by their shades of brown, tan, pink, and white rather than by the social construct of race.) So I had to explain that for the first time. I was hoping my mixed-race baby could get a little older before having to introduce the concepts of race and racism, but the words and lessons of Martin Luther King, Jr., are certainly an excellent starting point for that discussion.

Also? The kindergartners colored in little stapled-together coloring books about MLK. On the cover, Ben opted for the lime-green marker for Dr. King’s face: 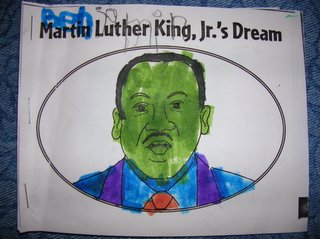 The kids I nannied for said "Brown" people too.

I had forgotten about filmstrips until just this moment.

When I was about that age, I noticed the disparity in the term "black" and the actual color of the skin, so I assumed that if brown people were called "black" then black-colored people would be called "brown". I found it all rather silly.

Oh yeah, we learned it. I guess I lied about not remembering lyrics.

HI! Great Blog! I linked over here on a Blog search, today I posted an article on a perspective on MLK Jr. Day, check it out if you’d like… I've enjoyed reading through your archives, I’d love to establish a reciprocal link with your blog, let me know if you’re interested:

a smidgen envious about running the filmstrips? We used to have a sort of children's mafia that made sure only the "made" kids were allowed access to the film projector. that was serious business, and everyone wanted in on it.

A green MLK really does say it all doesn't it? Awesome.

I was always very confused between Martin Luther King Jr. and Martin Luther (growing up Lutheran, the later was much more important than the former). I kept making them one person in my head, and couldn’t figure out how the church had been around so much longer than its founder, Dr. King.

That's funny you mention about kid's views of people's color. My kids do the same, they'll say that peach girl, or that tan boy. I think that race is stupid anyway. When you go to places like New York and you see a bunch of people that you think are "black" and they speak in languages that you don't understand, and you see people that are "white" and they speak in foreign languages, you realize that black and white are ridiculous fictitious categories that serve no purpose.